How many of you remember Allison Roe? Though her reign as a leading female distance runner in the early 1980s was brief, it was impressive. She won the Boston and NYC and Seoul marathons in 1981, and broke Mary Decker Slaney’s course record in the iconic Atlanta Peachtree (10K) road race the same year.

This despite the fact that Arthur Lydiard, a legendary distance runner and coach (Lydiard and Roe are both from New Zealand), didn’t believe Roe could be a good marathoner, because she was too big. 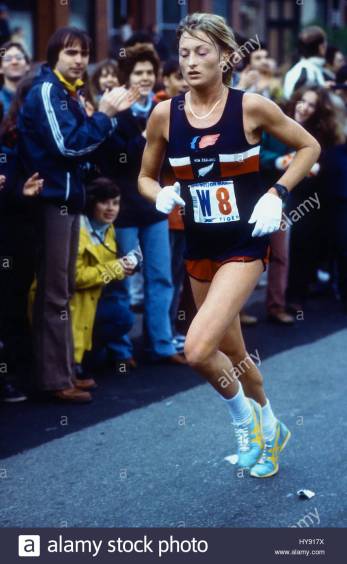 No. She looks incredibly fit and strong. In 1981, as a college freshman, I wanted her deltoids (still do). I also wanted her speed, and seeing an elite female distance runner with a slightly mesomorphic frame – which is the direction I always leaned when I was training – gave me permission to fantasize that I might be able to log long, fast distances, too, despite being what my own father considered “big for a runner.”

I thought of Allison Roe last week when I read about the steaming piles of metaphorical horse dung heaped upon runner Allie Kieffer in the weeks leading up to the 2018 NYC Marathon. In that unique blood sport in which total strangers feel entitled to make rude and critical comments about the shape and weight of women’s bodies, Kieffer was the subject of all kinds of internet nonsense challenging her legitimacy as an elite marathoner. “Not buying it. Nobody runs that time at that weight without EPO or blood doping,” according to one genius.

Here’s a picture of Allie Kieffer. Huge, isn’t she?

(She’s also pictured at the top of this page, a photo from a Nike advertising campaign.)

Friends, I’m figuratively biting my tongue to avoid typing words into this post that would embarrass my mother. But this attitude about women runners’ bodies is bovine residue.

I know guys put up with this crap, too, but not nearly to the extent that women do.

For much her running life, Kieffer tried to lose weight at the request of her coaches, or to meet the running community’s twisted standards for an “ideal” distance runner’s body, and guess what? She got sick. She got injured. When she allowed herself to build some muscle and carry a little more weight, she got healthier, stronger, and faster.

So she started training and eating her own way. Last year, she placed fifth in the NYC marathon. And as she geared up for last week’s NYC marathon, the horse dung started flying. But guess what? While she placed 7th – two spots lower than last year – she set a personal record; yeah, she GOT FASTER!

“In our society, women are led to believe that skinny equates with not only faster, but better; that we have to conform to stereotypes to excel; and that “strong” may be a derogatory euphemism. The criticism doesn’t discriminate; it takes on different forms for different women. For me, it took me years to come to a realization that, in fact, dropping too much weight for whatever reason will always be an unhealthy shortcut to an end-goal, laden with tremendous physical and emotional consequences; that weight is not a metric of success; that there is a better way to set our goals. That our accomplishments are about so much more than a number on the scale.” (Kieffer, in her recent essay for Shape magazine)

I love what Lindsay Crouse wrote about Kieffer in her New York Times story:

…Kieffer has given us a powerful example of what can happen when we stop trying to force ourselves to meet preconceived notions of how to achieve success — especially unhealthy, untrue ideas — and go after our goals on our own terms. When we focus less on fixing what we consider to be inadequacies and more on reinforcing our strengths, we can realize potential we didn’t even know we had.

If you are lucky enough to be able to run – whatever your body type – get out there and run. Be proud. Be grateful. Be yourself.

5 thoughts on “Let’s get physical”