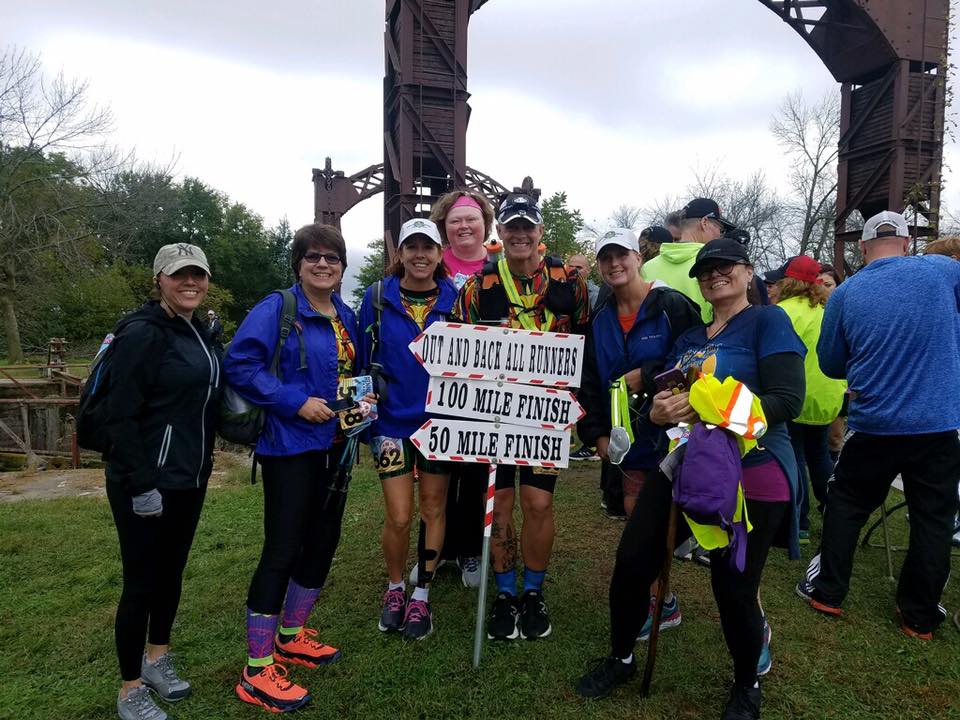 (Update: no idea how that weird Facebook link got into this page, but it’s gone, now!)

“…(J)ust as I faced turning 50 determined to be in better shape than I’d been at 40, I’m facing the second half of my fifties determined to get back where I was five years ago… to the extent that’s biologically possible! Sometimes I need a special challenge – a race of some kind, for example – to focus me and motivate me, so I’ve picked one. But it’s so ludicrous that I’m not going to tell anyone for a while. For now, I’ll just say that I have the better part of a year to get ready for it, and I’m going to need every week.”

In February, I “went public” with the event: the 50K race at the Hennepin Hundred in Illinois. In April I reported in on my training progress – or lack thereof. The gel injections I was so excited about did absolutely nothing for my knees, which was a serious bummer, considering how much of the cost I had to cover out of my own pocket. But it also meant admitting to myself that I would NOT be running this 50K; I’d be walking it.

Fast forward to June, when my longest training walk was 8 miles. I still had high hopes for increasing the mileage, but by the end of summer, that 8 mile walk in June was the longest one I had managed. Training to walk ultramarathon distances is logistically a little trickier than training to run them: quite simply, you need more time to cover the same distance! Even if I could maintain my fastest walking pace (currently 15 mins/mile) over many hours, I couldn’t find enough empty hours in a row (say, 8-10 hours/day, at least once, if not twice a week). I tried doing morning and evening workouts, with a short lunch-break walk in the middle of the day – but that’s not the same as experiencing long hours of nonstop walking. I also increased my efforts in the gym, to work on my core strength and leg strength. But between my job, commute, and ordination training activities, I couldn’t manufacture any other empty hours without giving up even more sleep.

Nonetheless, on October 5 I piled into a car with Robert Neeley (past blog guest), his wife Karla and his sister Patti, and we headed for Sterling, Illinois to meet up with my good friend Tammy – who had gamely accepted the challenge to walk with me – along with her sister Pamela and Pamela’s friend Josephine. And on October 6, we all lined up at 5 p.m. (yes, the 50K is a night race!) to begin our adventure! Bob, Karla and Patti would be running. Tammy, Pamela, Josephine and I were walking.

Our walking pace started off fairly well – right around 16 minutes/mile. By mile 15 we had slowed to nearly 20 minutes/mile, partly because our aid station stops were slowing us down: it was difficult for me to get the bum leg swinging efficiently again after a rest (at mile 15 the backs of my legs cramped so badly I wondered if I could continue; but the aid station folks filled me with bananas and electrolytes and got me back on the road) – rather like getting a stopped train rolling again.

Mile 20 was the “drop bag” station at which we all had small bags of dry clothing if we needed to change. Josephine was (in retrospect) probably starting to experience a little hypothermia, and had already put on all the layers she brought. The rest of us were still warm and dry and didn’t need to change clothing or shoes. But – cruel irony – the dark skies opened as we left that aid station. For the next six miles, we trudged along in a cold steady rain, in the pitch black night. We were too far along to quit, but it was a long, dark night of the soul from there on out. Not even the excellent Spotify playlist curated by Tammy and her sister Pamela could bring us back to life. The rain let up a bit at mile 26, but by then we were all wet and chilled, and we plodded through the final 5.2 miles like we were on a forced march. When we finally crossed the finish line just over 12 hours after we started walking, there wasn’t a heck of a lot of celebrating going on.

But later that afternoon we were talking and laughing over a delicious early dinner, and – fools that we are – within days we were plotting to find the next “walker-friendly” ultra-marathon to focus on.

I should point out that the Neeley clan – Bob, Karla, and Patti – skipped through their night like it was a regular old workout. They finished in just over 7 hours, and Bob is already talking about doing a 50 miler. (But first, he’s got the New York City Marathon ahead of him!)

We all had added incentive to complete this event, and to rejoice that we had the health and mobility to do so. Bob and Patti’s sister Gini was back at the Cleveland Clinic, recovering from a double-lung transplant. She’s still there, and though she’s getting stronger every day, she and her family could use your prayers! And if the spirit moves you to contribute, there’s a GoFundMe to help with her medical expenses.

What’s next on the fitness challenge radar? I’m not telling until I sign up for it. And I’m not signing up for it until I’m a little more convinced that I can pull it off with the knees that I’ve currently got. The important thing for now is to keep moving, and to be grateful that I can.

5 thoughts on “I’m an ultra-walker”