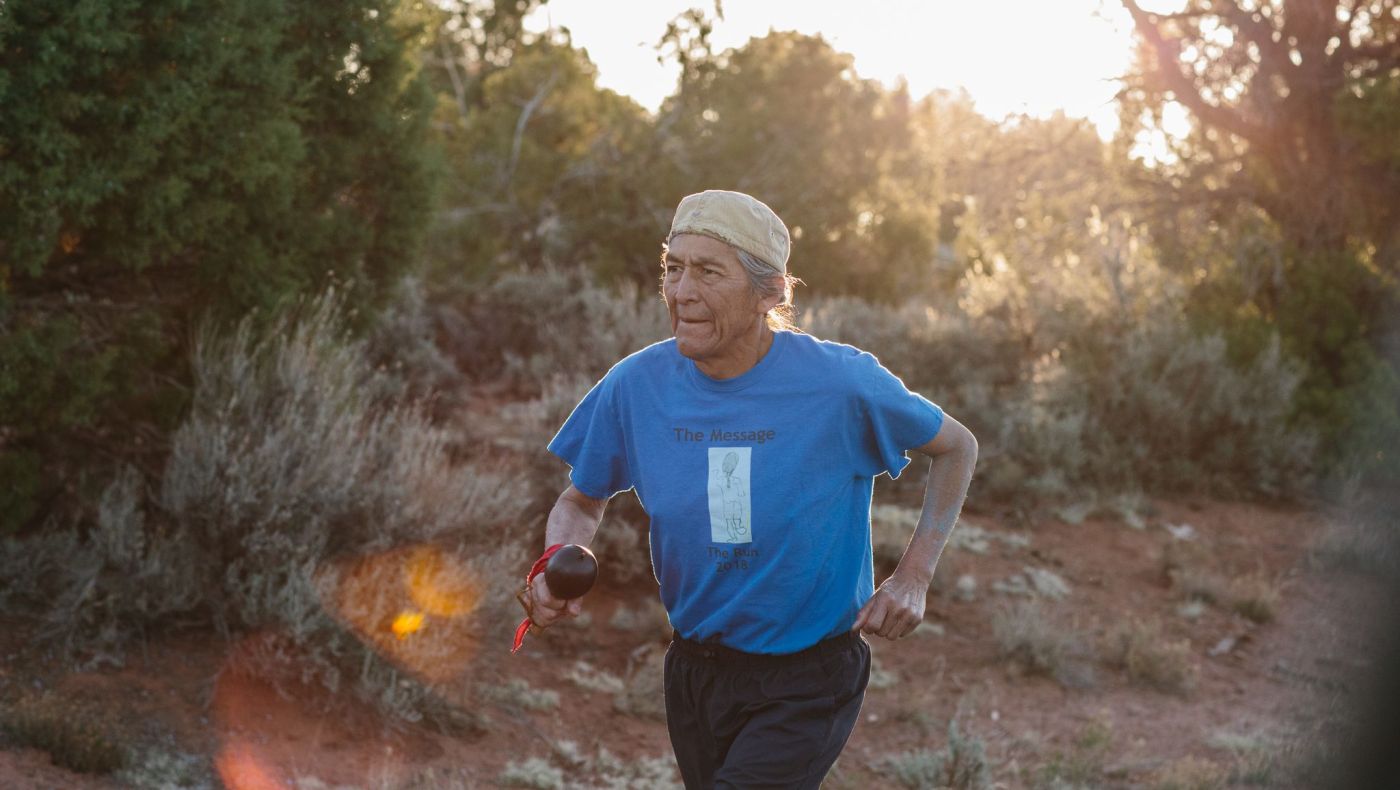 Despite being somewhat debilitated and dilapidated from the running perspective, I still read “Runner’s World,” “Trail Runner,” and even “UltraRunning” (a dilapidated girl can dream!) every month. The October issue of “Runner’s World” features a wonderful profile of 58-year old Edison Eskeets and his recent 330-mile tribute run, retracing the route his Navajo ancestors were forced to march in 1864, when the US Army drove them off their land and into internment.

Eskeets covered 330 miles in 15 days, running from Canyon de Chelly to the Plaza in Santa Fe, New Mexico’s territorial capitol. “The run’s end on June 1 would coincide with the 150th anniversary of the Navajo Treaty, which allowed the Diné to return to their homelands. Eskeets dubbed the undertaking ‘The Message—The Run,’ to acknowledge Navajo suffering during the Long Walk era, and celebrate their ultimate survival.”

And the October “Trail Runner” features 73-year old ultra-runner Gunhild Swanson. The online link to that article is not available, yet, but here’s one from a 2015 issue of “UltraRunning” magazine that will give you a sense of Gunhild’s “grit.”

I came across this gem of a story about older runners while looking for the Gunhild Swanson profile: “Still Running: Older runners prove that slowing down a little isn’t anything like stopping.”

When you ask runners why they keep lacing up their shoes and putting in the miles, they rarely mention the health benefits first. Instead, they’re motivated by the joy of running and the network of fellow runners. Five and a half years ago, Swanson lost her husband, Jack — her training partner and travel companion — to leukemia. Running was therapeutic, she says, and provided a supportive community of friends. Swanson set her personal records in the early 1980s — ‘a long, long time ago’ — and that’s not what running is about these days. It’s about being outside the first spring day in T-shirt and shorts, and watching for the flowers to bloom; seeing the seasons change and going out, even when the the weather is less than pleasant, for an adventure.

On a slightly less uplifting note: use it or lose it!  Yet another reminder that we lose muscle mass as we age. In fact, up to HALF our muscle mass disappears between the ages of 40 and 70. But we can also earn some back. The key word is EARN. Light weight training and body weight work helps people well into their 90s. Tai chi works, too. Or just do what RBG does.

Lastly… I’ve been taste-testing a few energy gel and energy bar brands and flavors to decide which ones I’ll pack for the Hennepin 50K in October (as my earlier comments hint, I’m resigned to walking this event instead of running it; running was my hope when I signed up!). And friends, we have a winner in PICKY BARS – though I’ve tried only one flavor (“Moroccan Your World”), so far. There’s no weird chemical-y after-taste, the flavor is great, the bar chews easily (unlike jawbreakers like RX Bars [I like their blueberry flavor, but good grief! Watch your dental fillings!]), and it doesn’t leave me thirsty. Highly recommended. (And I get nothing for saying any of that!)