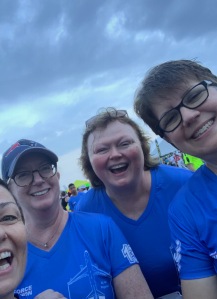 OK, that sounds a little melodramatic. But my half-marathon walk at the US Air Force Marathon event last weekend was kind of a reckoning, when I was forced to admit that not only is running way, way, way out of the picture, but until I go forward with knee replacement, distance walking probably is, too.

The event itself is well-organized, inspirational, and often emotionally moving. And I was surrounded by good friends, which can make just about anything bearable. 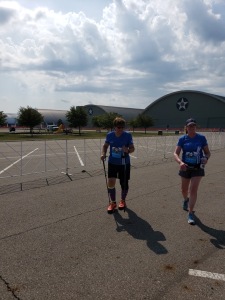 With the aid of trekking poles, I was able to keep a pretty good pace for the 13.1 miles.

But, no lie, it was misery to walk. A thunderstorm delayed the start by 30 minutes, and then the course was enveloped in sweltering heat and humidity. At four miles in, my leg was already a wreck. When I flipped through the “official” photos of me taken along the route, all but a couple of them depict a woman who looks like she’s on a forced march. No temptation to purchase any of those!

But we were all smiles at the end. 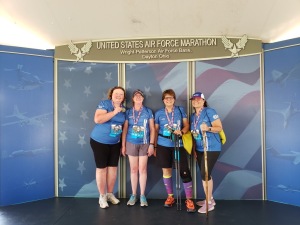 I had received a cortisone injection two weeks earlier, and was placing a lot of hope in that. Prior to the injection, two long “training” walks leading up to the event itself hinted at the unpleasantness to come. But hope springs eternal! 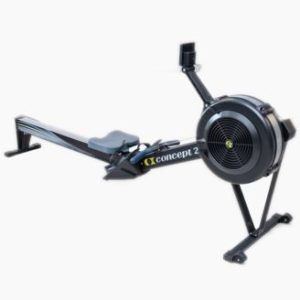 Now I’m sobered up. There will be no more long-distance walking without miraculous improvement in my knee. Practically speaking, I can’t fit knee replacement surgery and recovery into my schedule in the next six months, at least. So I am going to remove the clothing that’s been hanging on my stationary bike (since completing the cycling challenge in July) and start pedaling again, and I’m signing up for the group indoor rowing sessions that take place near me on winter evenings. If I can find a cheap indoor pool, I’ll alternate rowing with swimming. Focusing on a distant challenge like this open-water swim is good for my brain!

Hey! Read Michael Franti’s great post about deciding to take better care of his 53-year old self. Good call, Michael! Of course we want you to be around for your wife and young son, too, but we also want to hear more great music from you and Spearhead!

5 thoughts on “Day of Reckoning”